First announced at the NBAA Convention in Las Vegas, Nevada in October 2013, the Falcon 5X, manufactured by the French based Dassault Aviation, will feature one of the largest cabin cross sections and one of the most advanced flight controls in the industry.

The Falcon 5X offers a range of 5,200 nm and is equipped with a new incredibly efficient wing and a brand new Snecma Silvercrest engine offering up to 15% better fuel efficiency than most others in its class. 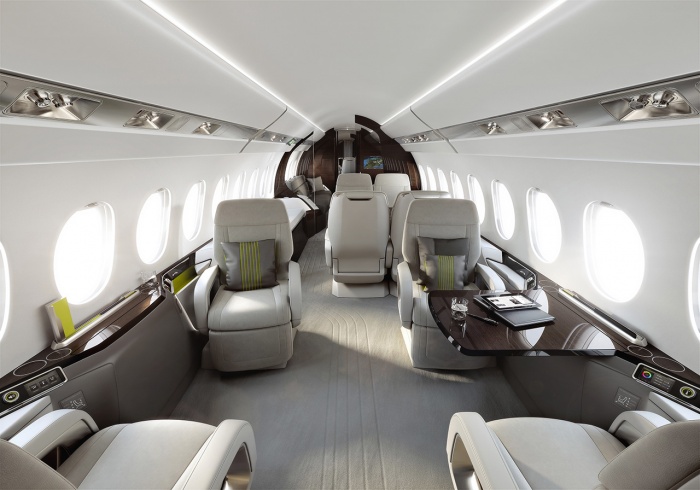 Dassault took a cocoon-like approach with the cabin design of the 5X. It is arranged in a way that puts everything needed just at arm’s reach, including access to power and internet.

The seats can change from business to rest or sleep mode in quick transition. There can also be up to six full berths on the 5X.

The aircraft has 28 cabin windows that are 30% larger than the windows on the Falcon 7X. One of the most unique features of the Falcon 5X is a skylight that allows extra natural flight into the cabin.

The Falcon 5X can fly from New York to London City without stopping, yet has the ability to land on shorter runways thanks to its wing design, which is optimized for both high and low performance flight.

After a successful first flight in the second half of 2017, manufacturer Dassault Aviation announced that production of the model was closed due to problems with the Safran Snecma Silvercrest engines. After a while, it was published that the Falcon 5X will be equipped with new engines from Pratt and Whitney Canada and is predicted to enter the market in 2022.