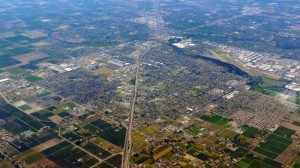 Modesto is a city in north central California, in the San Joaquin Valley. With a population of about 201,165 people, Modesto is the 18th largest city in its state. The city is a home to numerous tourist attractions including Gallo Center for the Arts, McHenry Mansion, John Thurman Field, Aquatic Dreams Scuba Center, Modesto Arch, Stanislaus River Rafting, Affordable Massage Studio, and some others.