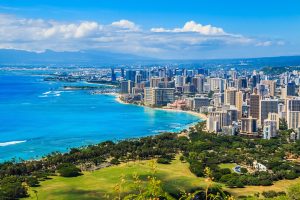 Located on the island of Oahu, Honolulu is the capital city of Hawaii. It is the most popular city in Hawaii that attracts about 20,000,000 tourists yearly. It’s the center of transportation, government, and commerce.

Honolulu is one of the major tourists’ destinations, which has many places of interests such as Waikiki Aquarium, Waikiki Beach, Honolulu Botanical Gardens, Honolulu Zoo, and Hanuman Bay Nature Preserve Pearl Harbor. The city is located between 2 dormant volcanoes, the Pacific Ocean, and a 5,000 ft. high mountain range.

Some other islands, Maui, Hawaii, and Kauai are visible from certain points in Honolulu. It doesn’t matter whether you are on a wedding honeymoon, business trip, or family holiday, Honolulu has something to offer for everyone, with more than 100 luxurious restaurants, 20 nightclubs, and 30 inclusive spas and resorts.