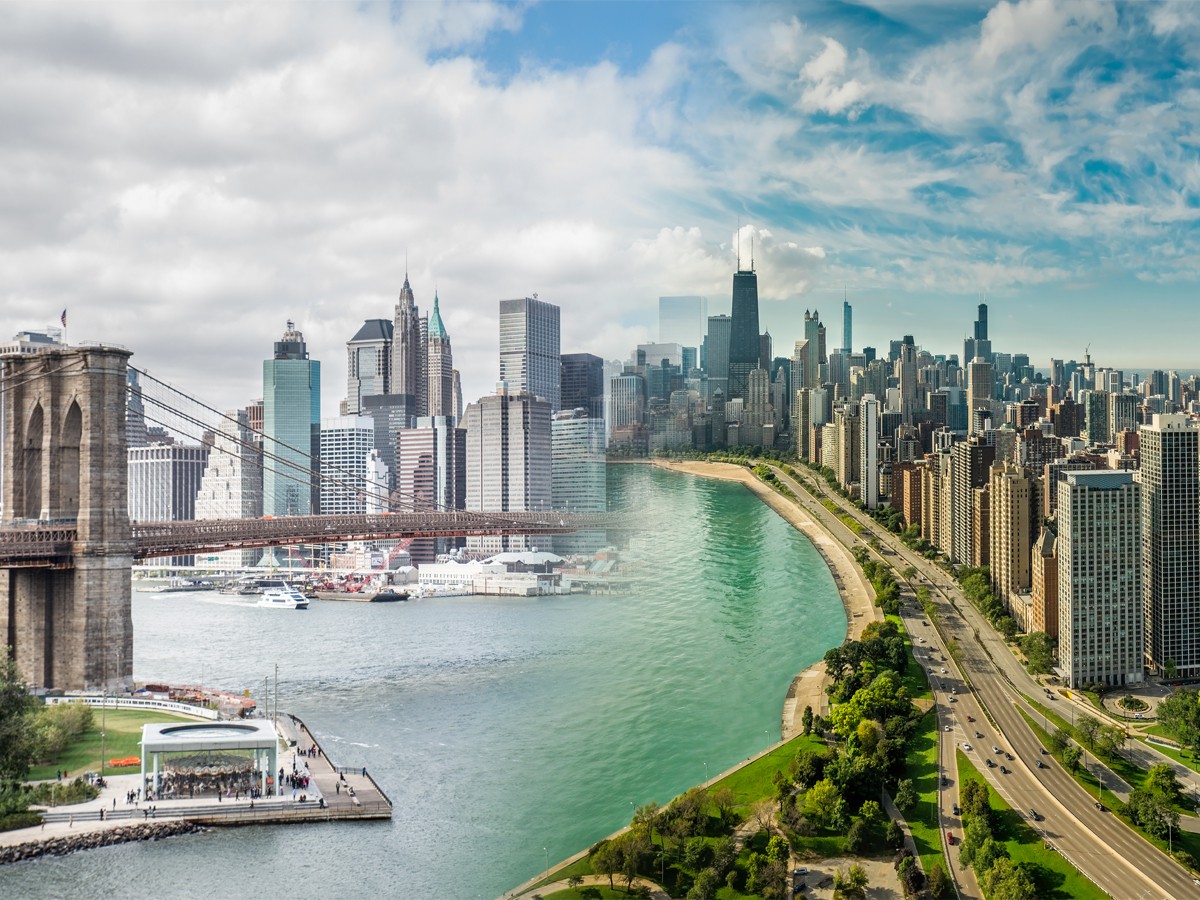 Chicago is one of the largest cities in the U.S. and home to many Fortune 500 companies headquartered in business centers throughout the city. Situated on Lake Michigan, Chicago’s skyline is dotted with iconic buildings, including the 1,450-foot 110-story Willis Tower (formerly known as the Sears Tower) and the 100-story, 1,128-foot John Hancock Center. The city’s urban parks and green spaces offer a serene retreat from the hurried pace of life in the Windy City. As you travel around Chicago, you will meet some of the most industrious, friendly people in the U.S.

What Airport Should I Use For My Private Jet Charter to Chicago?

Chicago O’Hare (ORD) is located on the Northwest side of Chicago, 14 miles northwest of the Loop business district.

Chicago Midway Airport (MDW), on the southwest side of the city, is located eight miles from the Loop.

Super Midsize jet options for private jet charters from New York to Chicago include the Hawker 1000, Falcon 50EX and the Citation X+, among others. Super midsize jets transport a maximum of 12 passengers and feature a stand-up cabin, luggage space and ample legroom.

The Hawker 1000 is known amongst private jet charter clients for its quiet, comfortable cabin and extended range capabilities.

The Falcon 50EX easily covers the charter route from New York to Chicago with a top speed of 569 mph. This jet offers ultra-comfortable seating for up to nine people custom made for collaborative meetings or relaxation.

The fastest jet in the Cessna family, the Citation X+ can reach a timesaving top speed of 700 miles per hour, flying passengers from New York to Chicago faster than any other business jet.

Midsize jet options for private charters from New York to Chicago include the Hawker 850XP, the Learjet 60XR and the Gulfstream G150.

The Hawker 850XP is the second largest of the Hawker series and can seat up to 8 passengers comfortably. The Hawker 850XP climbs fast and has an extended range of 2,642 nautical miles. With its design, the aircraft can travel against headwinds at a high-speed cruise, while using less fuel.

The Learjet 60XR is frequently selected for its combination of the best of technology and comfort. This powerful midsize jet can climb at 6,000 feet per minute and has a flight range of 2,269 nautical miles. The quicker the rate of climb, the faster your jet will reach its cruising altitude and the smoother your ride will be. Your jet will also burn fuel more efficiently at its cruising speed.

The Gulfstream G150 is one of the fastest midsize jets available, with a top speed of 475 knots. Cabin layout options in the G150 include a club seating layout with two forward-facing seats in the rear of the cabin.

Light jet options for private jet charters include the Cessna Citation M2, the Cessna CJ4 and the Phenom 100. Light jets offer a cost-effective charter option configured for speed and efficiency.

The M2 features include warm LED lighting throughout the cabin, a top speed of 404 knots, and plenty of range.

The Citation CJ4 represents the ultimate combination of speed, range and cabin capacity charter clients seek when chartering a Light jet. The CJ4’s cabin is configured for comfort with six oversized leather seats.

The Embraer Phenom 100 delivers an efficient performance. This sleekly designed jet is a top performer in its class with a range of 1,971 nautical miles, a cruise speed of 453 mph and a maximum altitude of 45,000 feet.

Light jets can seat up to 10 passengers and typically include digital entertainment, a galley and Wi-Fi for in-flight entertainment.

In conclusion, private jet charterers frequently return to Chicago for business and leisure activities year-round. Situated at the heart of the Midwest, you will discover the exceptionally friendly, industrious demeanor Midwesterners are known for. Chicago’s renowned museums and attractions will fill your day with art and science at the Museum of Science and Industry, Field Museum, Shedd Aquarium and Adler Planetarium, the first planetarium in the U.S. A favorite destination for art enthusiasts, The Art Institute of Chicago collection includes many renowned Impressionist and Post-Impressionist works by Vincent van Gogh, Georges Seurat, Claude Monet, Grant Wood, and Mary Cassatt.