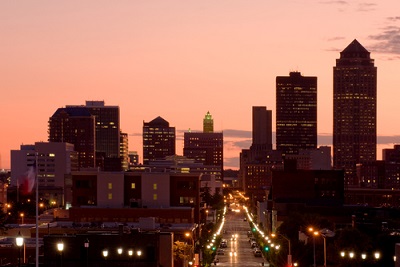 Des Moines is the capital of and the largest city in Iowa, in the southern central part of the state. The city is the county seat of Polk County. It has a population of about 203,433 people and a total area of 82.60 square miles. It is the headquarters for Aviva insurance, the Principal Financial Group, the Meredith Corporation, Wellmark Blue Cross Blue Shield, EMC Insurance Companies, and Ruan Transportation. In 2011, Des Moines was ranked by Self Magazine as the number 1 Greenest city for Women.