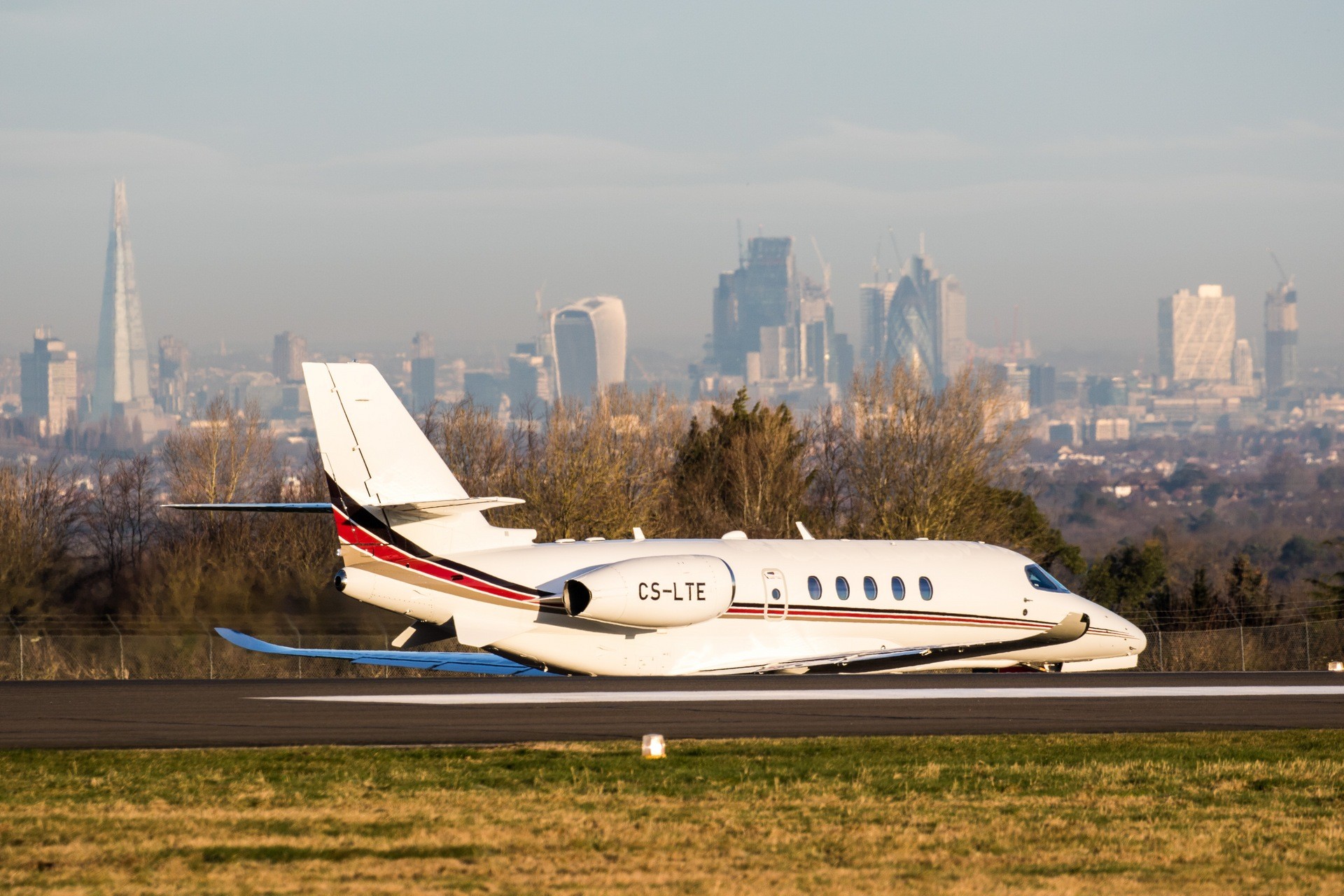 An important economic, political and financial center of England, London is home to exclusive shopping centers, elegant architecture, and plenty of opportunities for leisure or business. The city ranks first among the most visited cities on Earth and offers some great places to land charter flights to and from London.

When you choose to travel privately, you can take one of the 8 major international and private London airports for a private jet as well as enjoy first-class amenities and separate terminals for VIPs.

Approximately seven miles from the center, one of the closest airports to London is London City Airport, an ideal landing or departure point for private planes. The airport is renowned for its efficient VIP services and business-friendly atmosphere due to its proximity to London’s two main financial centers, Canary Wharf and Royal Docks.

London City Airport has one concrete runway, 1.5 thousand meters long, with restrictions on the aircraft type that can land here. In addition, the passenger terminal, presented in the form of a two-story building with 18 gates to the landing.

Among the services here is a conference room with the necessary equipment, a spacious waiting room, parking, and many options for the comfort of VIP clients. Despite its small size compared to the four major international airports in the region, LCY serves most private flights to London.

Only 14 miles from London is one of the largest and most significant aviation hubs globally, London Heathrow Airport. With good transport links and easy access to central London, LHR can seem like an ideal airport for a private flight to London.

In terms of total passenger traffic, London Heathrow Airport is the third busiest airport in Europe. The area has two runways in good condition, at 3.6 thousand meters and 3.9 thousand meters in length. Serving more than 80 million people per year, LHR has five terminals with spacious waiting areas, an expanded check-in area, automatic check-in at the parking lots, and approximately 115 gates.

In addition, the airport has a separate terminal with several VIP facilities for heads of state or members of the royal family to ensure the most luxurious journey possible.

The public London Biggin Hill Airport 14 miles from London may not be as famous as the other airports listed here, but it’s great for jet charter London with everything you need for business or personal purposes. The airport began long before World War II and has been in operation for over a century.

For many years it has remained one of the busiest business aviation airports in Britain and Europe. BQH airport is located outside the Greater London area in the countryside. However, there are many options for getting from the airport to the city center, such as shuttle, rental car, or cab service.

London Biggin Hill Airport has a paved main runway, about 1.8 thousand meters long with an instrument landing system installed, two operators of fixed base business aviation, which will carry out maintenance of your aircraft, and a modern passenger terminal with many additional services for VIP clients, which is entirely consistent with the current level.

About 1.5 miles from downtown Luton and 28 miles from central London is London Luton International Airport, one of the safest and most flexible airports for jet charter London. Here VIP customers can enjoy the comfort and a high level of service by world standards. The area has a main runway, about 2.1 thousand meters in length, with an ILS instrument landing system and three FBO stations.

The London Luton Airport terminal offers passengers private flights to London, two private lounges with individual check-in desks, an abundance of stores, a separate baggage hall, and around 41 gates. Among the popular services here, the Internet, the possibility of transfer to the hotel, car rental, and much more.

The bustling international London Gatwick Airport is the eighth busiest airport in Europe and the second most active in the UK. During its long work, the airport has won many international awards, like the Gold Medal from the Royal Society for the Prevention of Accidents.

Furthermore, it can serve about 43 million passengers a year. LGW is located 30 miles from London and offers VIP customers after landing a cab service or a rental car for quick access to the center.

The 674-hectare site has two runways of 2,500 meters and 3,300 meters in length. However, the second runway can only be used when the main runway is not used, leading to severe delays. London Gatwick Airport has two terminals North and South. Both buildings have stores, restaurants, services for passengers with disabilities, and separate lounges with increased comfort for private flights to London.

The modern and highly efficient London Farnborough Airport is designed exclusively for private flights to London and offers several VIP lounges. The airport is conveniently situated 39 miles from the center of London and claims to be one of the busiest airports in Great Britain. FAB offers unique facilities and services and is equipped with amenities such as spacious lounges with drinks and snacks, play stations, and much more that can make your stay comfortable.

London Farnborough Airport is one of the most used private aviation airports in the region and features one asphalt-paved runway, over 2,400 feet in length, hangars for rent, and a new control tower. About 30,000 aircraft landed at FAB in 2018.

The best choice for many private flights to and from London is London Stansted Airport, just under an hour’s drive from the city center. The airport has dedicated facilities for private jets, is open round the clock, and is well connected to the M11 freeway, making it a popular choice for business aviation.

At London Stansted Airport, the VIP customers of the fixed base operator will be provided with the necessary privacy in a separate terminal and supplied with what they need for business. One runway is in good condition, about 3,000 meters long, ideal for direct international flights, and can accommodate VIP aircraft more considerably than a Boeing 767.

The terminal at STN is divided into three zones, has about 28 check-in desks, 40 gates, and six storage areas for narrow-body aircraft. In addition, the airport has plenty of parking, bus service, and shuttles between the parking lots, terminal buildings, and hotels.

Halfway between London and the Midlands is the public London Oxford Airport. The airport specializes in general and business aviation and is a little further away from London, 62 miles than other private jet airports, but also perfect for private flights to London. Thanks to the adjacent M40 freeway, passengers have easy access to the city center after landing.

London Oxford Airport does not require slots, has customs clearance on request, and is a UK entry point for pets. The airport has one asphalt runway, 1.5 thousand meters long, one fixed-base operator, and a particular terminal for business aviation. There is a chic waiting room with immigration and Internet in the terminal building. Furthermore, outside the terminal, there are stores, a bar, and a cafe.

If you fly to London by private jet, you can avoid the crowds of tourists in the extremely bustling capital of England with the best restaurants and architectural sights. Each of the airports listed above has the necessary amenities for the comfort of VIPs and excellent transportation links. To obtain a free quote, please use our online quoting tool, or call toll-free 1-877-281-3051.