Charter a private jet to and from Birmingham, United Kingdom 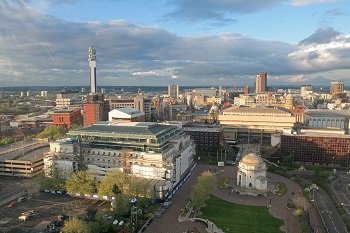 Monarch Air Group is among the most respected private charter brokers in the world providing extravagant charter flight services to and from Birmingham, United Kingdom. With 14 airports within 50 miles of Birmingham, Birmingham is an incredibly popular travel destination.

The most obvious choice is the Birmingham Airport (BHX), which is located within the actual city. The most common aircraft types include light jets (Citation Bravo, Citation CJ2 and Premier I), midsize Jets (Learjet 60XR and Hawker 800 XP) and large jets (Challenger 604, Gulfstream G450 and Legacy 600). We also have access to ultra long range jetsб turboprops, and VIP airliners.

About Birmingham and Places to Visit

Located in the West Midlands, Birmingham is Britain’s second largest city. After the Industrial Revolution in England, Birmingham was known as “the workshop of the world” or the “city of a thousand trades”. It is an important economical, commercial, conferences, and retail center along with an established high tech, research and development sector, supported by its three Universities. England’s second cultural center, after London, Birmingham, boasts many interesting sites to visit from modern developments like Millennium Point, to areas such as Digbeth, which are steeped in history.