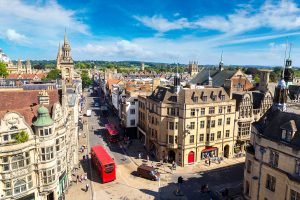 Located on the River Thames about 90 km to the northwest of the capital city London, Oxford is the academic town and the county seat of the county of Oxfordshire, England. It became an important center of learning by the beginning of the 12th century and developed in the 20th century as a center of the steel products and automobile manufacturing industries.

Oxford is home to the oldest university in England, the University of Oxford that has attracted students worldwide. Often called “The City of Dreaming Spires”, Oxford is a city with rich culture, fascinating history, picturesque surroundings, stunning attractions, and highly regarded universities in the world.

The most popular tourist attractions include the Sheldonian Theatre, the Ashmolean Museum, the Bodleian Library, the Botanic Garden, the Hertford Bridge, the Carfax Tower, Christ Church Cathedral, the Tom Tower, and the Radcliffe Camera. The beautiful, vibrant, and historic town of Oxford boasts wonderful parks, landscaped gardens and a scenic canal, with several popular punting stations, and attracts over 4 million of visitors each year.