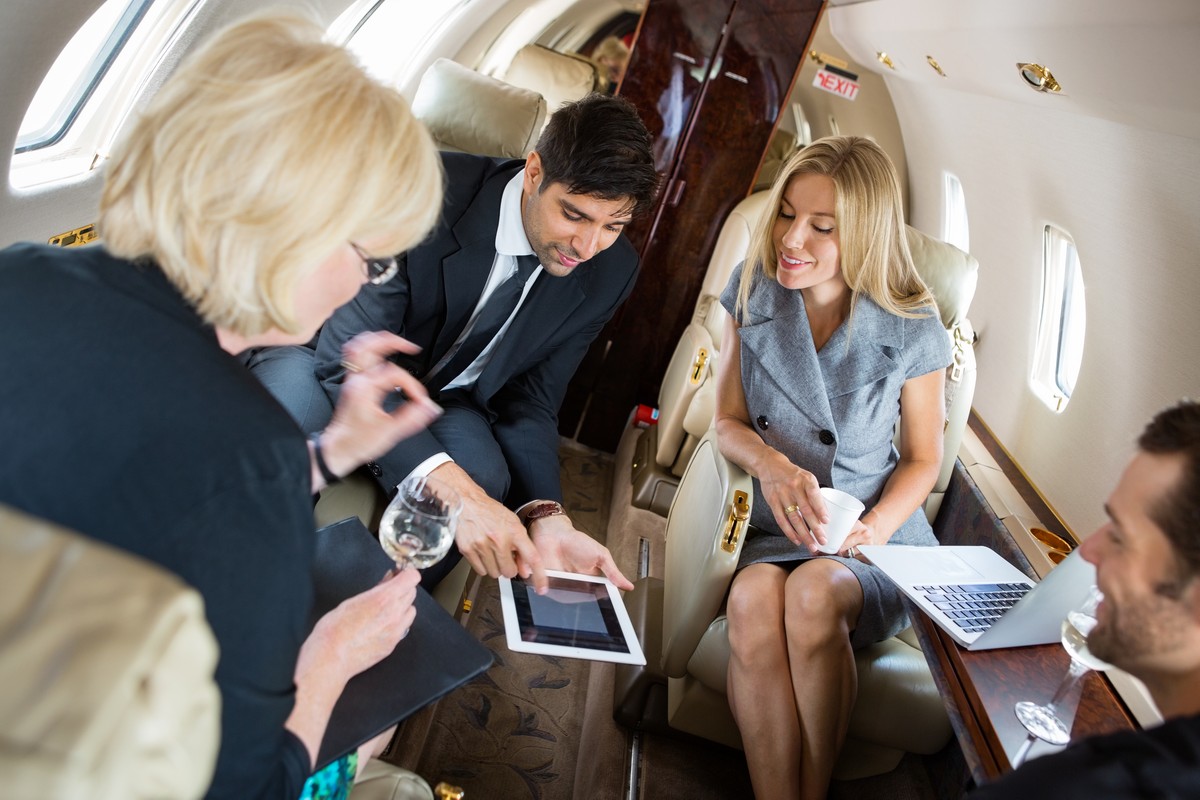 In today’s age the old adage “Time is Money” is now more true than ever before. With speed and connectivity increasing at an unprecedented rate, not being able to stay connected while in the air can have costly effects. Whether you are needing to update your board members, catch up with family and friends, or modify your next presentation, Wifi is a must.

Many clients utilizing private aviation find themselves needing to stay connected while in the air to remain as productive as possible. After all, time is one of the only commodities we cannot buy back. In the US, an increasingly large number of aircraft come equipped with Wifi. The wifi onboard is either provided through a land-based tower system or satellite antenna. Depending on the aircraft’s system and route, available bandwidths will vary.

Land-based Wifi is typically installed on smaller aircraft for domestic, over land routes. It uses a system similar to that of a cell phone where the tower beams a wireless signal up toward the aircraft. Once received by the aircraft it is then transmitted through the onboard router to the passengers so they may control the onboard entertainment system, review presentations, or FaceTime while tucking their kids in. On some aircraft wifi is complimentary and others there may be a small surcharge associated for data. Typical speeds for land-based systems are around 10 Mbps.

In the larger aircraft such as Heavy and Ultra Long range jet, one will typically find satellite antenna’s for those longer transoceanic flights as the land based towers signal is not powerful enough to transmit to an aircraft in the middle of the ocean (only about 50 miles out into the ocean). When using the satellite system, the aircraft is connecting to a satellite in geostationary orbit, roughly 22,300 miles about the earths surface. Once the aircraft receives said signal, it then transmits out the signal through a router to the passengers using an onboard router. Speeds range from 12 to 20 Mbps. To give you an idea, research firm Statista reports the average household’s speed hovers around 20Mbps. This system can come at a much higher cost than the land-based system, especially for transoceanic flights as they tend to have much longer flight time.

In Europe, prior to 2017, the only inflight wifi system was satellite based service so the prevalence of land-based systems is just now taking hold. With the recent introduction of land- based systems in Europe, keep an eye out for services like GoGo inflight internet to become more available and economical as the service spreads and gains more market share. The introduction of land-based services came as a huge sigh of relief for European travelers as land-based towers are a much more cost effective route for private aviation wifi needs. While speeds may not be as fast as your fiber connection, it will get the job done and keep you connected to your most valuable commodity, your phone/ computer. The only restriction imposed from the FAA is that the aircraft must be at altitudes over 10,000 feet.