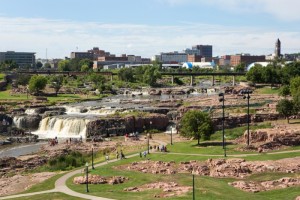 Sioux Falls is the largest city in South Dakota and an industrial and commercial center in the southeastern part of the state, on the Big Sioux River. The population of the city is about 153,888 people. Sioux Falls hosts Sculpture Walk, First Fridays, Festival of Bands, LifeLight Festival, Party in the Park, Jazz Fest, and some others. The most popular tourist attractions include Falls Park, St. Joseph Cathedral, Sertoma Butterfly House, Pettigrew Home & Museum, Washington Pavilion of Arts and Science, Old Courthouse Museum, Xcite Family Fun Center, and many others.

The city is served by Sioux Falls Regional Airport (FSD / KFSD), which is located 6 miles from the center of Sioux Falls.