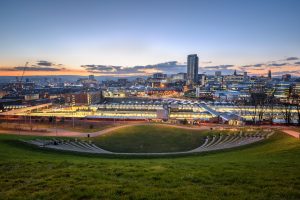 Situated at the foot of Pennine Hills, Sheffield is a city and metropolitan borough in the historic county of Yorkshire, northern England. With a population of 555,500 people as of 2010 it is one of the largest cities in England. The Sheffield Metropolitan Area comprises Barnsley, Sheffield, Doncaster and Rotterdam with a population of over 1.3 million. Sheffield has long been known for the manufacture of silverware and cutlery and for the production of steel.

Nowadays, Sheffield is one of the most advanced manufacturing centers of the UK and the world. It is a regionally important cultural, shopping, leisure, and service center. There are two world-known universities: Sheffield Hallam University and the University of Sheffield.