Monarch Air Group provides private air charter in Salem, OR. Our clients benefit from top-notch service, unrelenting dedication to safety, wide selection of aircraft, and years of experience in chartering private jets. To obtain a free quote, please use our online quoting tool provided below, or call toll-free 1-877-281-3051.

Charter a private jet in Salem 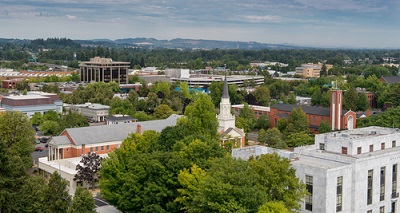 Salem is the state capital of Oregon, situated on the Willamette River south-west of Portland. It is also the county seat of Marion County. With a population of 154,637 people, Salem is the 3rd largest city in the state after Portland and Eugene. It is home to Corban University and Willamette University. The most notable points of interest include Salem Public Library, Minto-Brown Island Park, Oregon State Capitol, Enchanted Forest Theme Park, Elsinore Theatre, Hallie Ford Museum of Art, and many others.

The nearest airport is Portland International Airport (PDX / KPDX), which is situated 60 miles from the center of Salem.