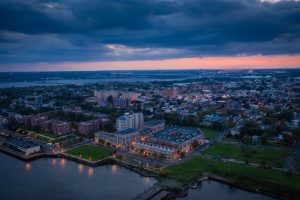 With a rich history dating back to 1651, Perth Amboy is well-known for being home to the oldest City Hall (built during 1714-1717) in continuous use in the country. The city is located in Middlesex County and has a population of around 51,000 people. Renowned as the City by the Bay, the city features a historic waterfront and offers many entertainment activities.