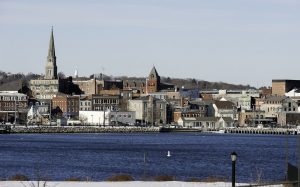 Situated at the mouth of the Thames River, New London is a vibrant seaport city in New London County, with an estimated population of around 26,984 people. New London is nationally known for its quality education and is home to the Mitchell College, Connecticut College, and the United States Coast Guard Academy. The city boasts an incredible culture and lots of entertainment activities, as well as hosts a number of notable events.