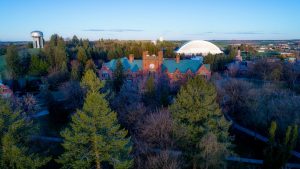 Moscow is the largest city in and the county seat of Latah County as well as the principal city in the Moscow Micropolitan Area. The city lies in the northern part of Idaho and has an estimated population of about 25,322 people. Moscow is best known for being home to the University of Idaho, which is a primary research university and land-grant institution in Idaho. Moscow enjoys a growing economy and is a commercial and agricultural hub for the Palouse region.