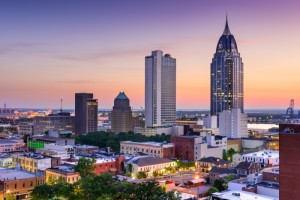 Mobile is an industrial city and port on the coast of southern Alabama. It is the county seat of Mobile County. With the population of about 195,111 people, Mobile is the 3rd most populous city of Alabama. Situated at the junction of the Mobile Bay and Mobile River on the northern Gulf of Mexico, it is the only seaport in its state. There are a symphony orchestra, plenty of art museums, a professional opera, a large concentration of historic architecture, and a professional ballet company.