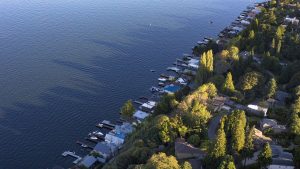 Beautifully nestled along the northernmost shores of the largest lake in King County – Lake Washington, Kenmore is a bedroom community, freshwater industrial port, unforgettable country retreat, and a vibrant city in King County. The city has a population of about 22,030 residents as well as an outstanding park and bike-trail systems. With a rich history dating back to 1901, Kenmore boasts a great number of historical places. The thriving economy and diverse employment opportunities make Kenmore a successful place to run a business.