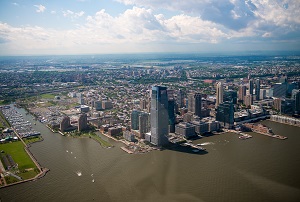 Jersey City is an industrial city in northeastern New Jersey, on the Hudson River, opposite New York City. With a population of about 247,597 people, Jersey City is the 2nd most populous city in New Jersey. A total area of the city is 21.080 square miles. The most notable points of interest include Liberty State Park, Statue Cruises, Easyriders Jersey City, Liberty Science Center, The Murder Mystery Company, Calypso Sailing Adventures, and some others.