How Private Jets Benefit from Winglets

Winglets are installed on private jets to reduce take-off distances, enable operation out of smaller airports, and allow higher cruise altitudes for overflying bad weather. All of which are valuable operational benefits for corporate travel. In addition to factory-installed winglets on new aircraft, aftermarket vendors developed retrofit kits to improve both aerodynamics and appearance.

More often these days you will notice aircraft are being fitted with sleek looking upturned parts at the end of their wings. These parts are called winglets, but they are not only there for aesthetics. Given that that can cost upwards of 1 million to install, they offer significant benefits to the operators and passengers alike.
Aerodynamics’s two major factors are lift and drag. Lift allows aircraft to fly and drag is the resistance that impacts the aircraft as it move through the air. High pressure under the wing creates a significant source of drag. This high pressure causes air to flow up and spin off, these are known as wingtip vortices. Along with the vortex comes induced drag and even the ability to disrupt other aircraft that are flying near each other. Winglets are designed to counteract these vortices.

One of the pioneers of winglet technology came out of NASA’s Aircraft Energy Efficiency program. Aeronautical engineer Richard Whitcomb developed the a vertical wingtip device we now call winglets. Using computer and wind tunnel testing Whitcomb test his hypothesis and in 1976 published findings that predicts winglets would diminish drag by about 20% and improve and aircrafts lift to drag ration by 6-9%.

The tests showed a 7% increase in lift to drag ratio with a 20% decrease in induced drag, identical to what Whitcomb predicted. Also the winglets were proved to have no adverse impacts on the aircrafts’s maneuvering capabilities. The Dryden test program results indicated to the entire aviation industry that winglets technology was worth its attention.

In 2010, Aviation Partners Boeing announced its blended winglet technology has saved 2 billion gallons of jet fuel globally, an approximate value of $4 billion and an equivalent reduction of almost 21.5 million tons of carbon dioxide.

Owners of private aircraft now have the option of adding blended winglets to their jets, and the benefits of doing are are very easy to see. For example a Hawker 800’s with blended winglets burn on average 7% less fuel than their straight-wing counterparts.

Along with the fuel savings aircraft with winglets can increase their maximum cruising speed. Specifically the Hawker 800 can fly 15 knots faster with winglets all the while burning less fuel. It even allows for extended range with increases up to 180 nautical miles. Winglets also help planes operate more quietly, reducing the noise footprint by 6.5% and they give aircraft a reduced take off distance meaning that can take off from smaller regional or secondary airports with shorter runways, allowing for more airport choices across the globe.

More and more research is coming out every day on the benefits of winglets and different styles are being developed and used. Boeing recently began installing their “Advanced Technology” winglets on their 737 MAX aircrafts. 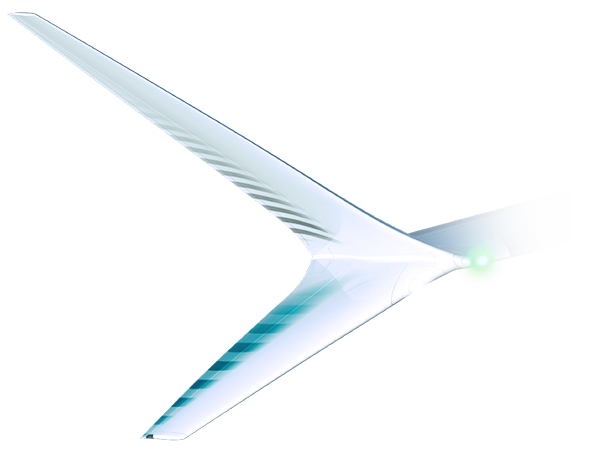 Although initial cost of adding winglets are great, over time the benefits make it work the money. With winglets you will see increased performance, reduced costs, and the increase of the private jet’s value.