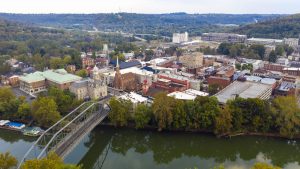 The capital city of Kentucky, Frankfort is the county seat of and a thriving city in Franklin County, with an estimated population of about 27,885 people. The city is characterized as home rule-class and is the principal city of the Frankfort Micropolitan Area. Frankfort boasts the world-class amenities, abundant attractions, and a diversity of employment possibilities.