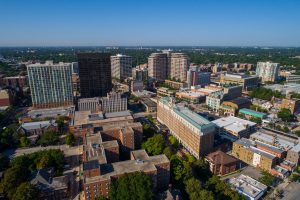 Conveniently situated just north of Chicago, in Cook County, Evanston is a diverse city with a multitude of higher educational, recreation, and business opportunities. The city has a population of about 75,000 people and is home to Northwestern University and the world headquarters of Rotary International. Evanston boasts an extensive public transit system, one of the largest arts communities in Illinois, one-of-kind shops, various boutiques, bright festivals, and exquisite museums.