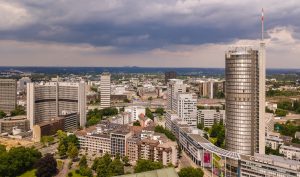 With an area of 210.32 square kilometers, Essen is a city situated on the Ruhr River in the German state of North Rhine-Westphalia, Northwestern Germany. It’s the sixth-largest city in Germany with an urban population of about 588,000 people. Being at the centre of the larger Rhine-Ruhr Metropolitan Region, which has a population of over 18 million, Essen is Germany’s largest metropolitan area. Originally mining town, Essen has emerged as a major industrial center, specializing mainly in automotive, engineering, oil & natural gas and manufacturing sectors.

Nowadays, it is home to some of the biggest German companies, including Evonik Industries AG, RWE AG, E.ON Ruhrgas AG, Hochtief AG, ThyssenKrupp, and seat to several of the region’s authorities. Essen hosts many business events, trade shows, and conferences in the country, especially the Essen Trade Fair.

Named European Capital of Culture for the year 2010, Essen boasts numerous historical, cultural, and architectural sights and tourist attractions, such as the Cathedral of Essen, Synagogue, Zollverien Colliery, Aalto Opera House, Folkwang Museum, and Villa Hugel. Being one of the biggest and busiest cities in Germany, Essen attracts both business and leisure travelers from all over the world.