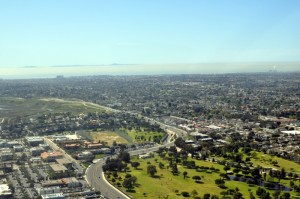 Costa Mesa is a city in southwestern California with a population of approximately 109,960 people. The economy of Costa Mesa is based mainly on electronics, services, retail, plastics, and pharmaceuticals. There are 26 beautiful parks, municipal golf course, 2 great libraries and 26 public schools. Costa Mesa boasts the Orange County Fairgrounds, which hosts one of the biggest fairs in California – the Orange County Fair.