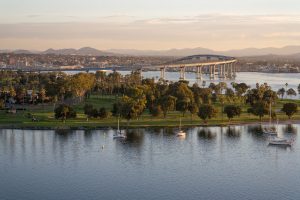 Nestled across the San Diego Bay, Coronado, often called The Crown City, is a popular resort city with an estimated population of about 25,952 people. The city lies in San Diego County and is home to the world-known resorts, such as the Loews Coronado Bay Resort, Coronado Island Marriott, and Hotel del Coronado among the others. Coronado boasts a thriving economy mainly based on tourism.