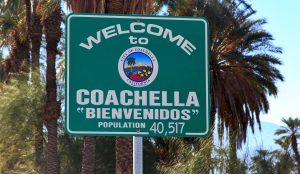 Located in Riverside County, east of Palm Springs, Coachella is the easternmost dynamic city in the Coachella Valley, with a population of almost 41,000 people. It is a fast-developing agricultural and rural community and a popular tourist destination in the state. Coachella hosts the Coachella Valley Music and Arts Festival, an annual arts and music festival that attracts many famous people and thousands of visitors.

Palm Springs International Airport is the closest major airport to Coachella, which is situated 26 miles from the city center and provides international and domestic flights.