Charter a private jet in Birmingham 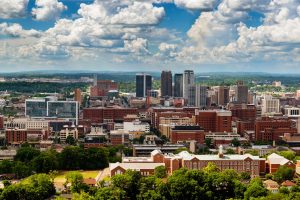 Birmingham is the biggest city in the state of Alabama. Often named as “The Magic City” by its state residents, Birmingham has real southern hospitality and charm. It is located in the rolling base of the Appalachian Mountains, which play an important role in the metal industry.

Due to its low income cost and competitive salary wages, nowadays Birmingham is considered to be the best city to live. It also provides residence to over a million people. The popular tourist destinations are Alabama Sports Hall of Fame, the Version Wireless Music Center, and the Red Mountain Vulcan Park that has the world’s biggest statue made of cast iron created in 1938, for 1904 St.Louis explosion.