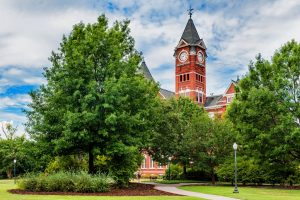 Located in Lee County, Auburn is the largest city in the eastern part of Alabama, with a population of about 62,000 people. It is a college town and is home to Auburn University, which is a top employer that provides the job to around 4,300 people. Auburn was ranked by U.S. News as one of the best places to live in the United States. The city is located on the fall line at the juncture of the coastal plain and the piedmont plateau, making it a popular tourist destination.

The nearest major airport to Auburn is Columbus Metropolitan Airport, which is situated 41 miles from the city center and provides domestic flights.